ANNOUNCEMENT FOR NKOLOFIA RESIDENT IN LAGOS ONLY!

There will be general meeting of Nkolofia Village Lagos branch on Sunday 8th of September 2019 at AIU Civic Center Surulere by 2pm prompt. Pls Inform others if you receive this message. Thanks: Secretary Nkolofia Lagos branch.

There will be an emergency general meeting of AIU Lagos branch on Sunday 24th March 2019 at our civic centre Surulere by 2pm prompt. Very crucial matter regarding the EKE MARKET STALLS shall be top on the agenda. Please all the Etitian residences in Lagos are expected to be there. Inform others if you receive this message . 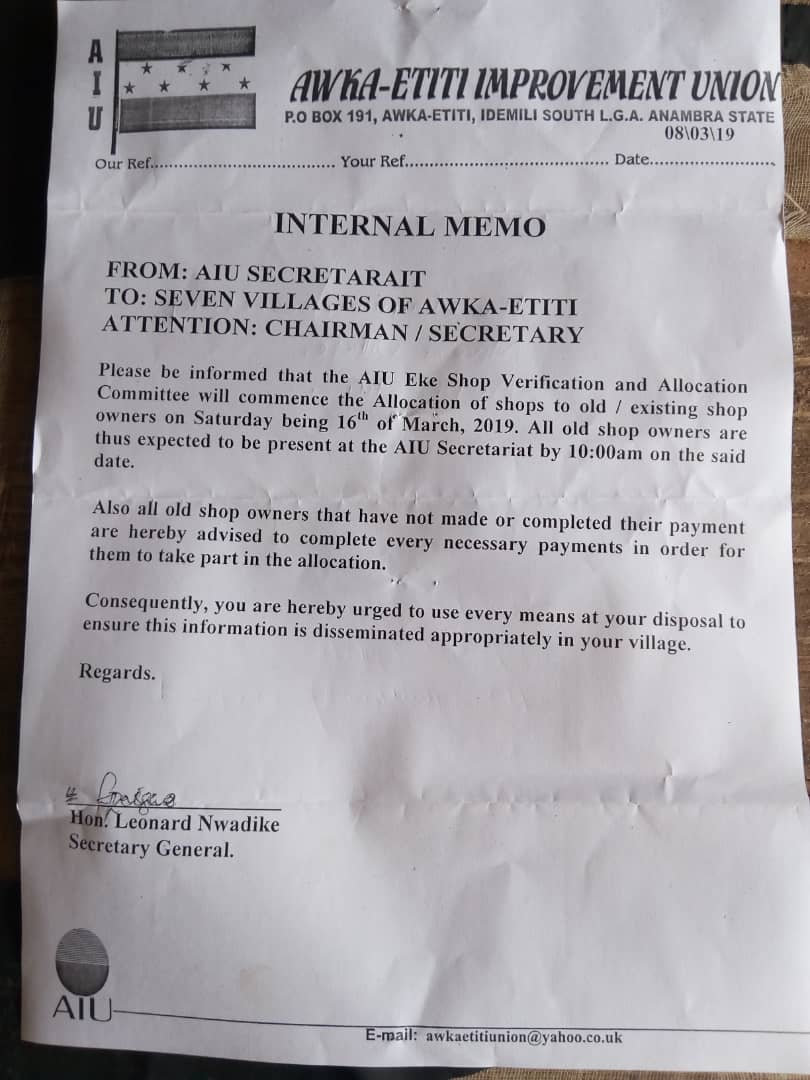 Please be informed that the annual prayer meeting of the Ejighinandu community in lagos, will hold on Sunday 11th March, 2018, the AIU civic/center surulere by 10:00am. please fast & pray on Thursday, Friday, and Saturday, 3days immediatly before the prayer day, from 6 to12 or beyond, with psalms 51, 24 & 103. please don't come with your children. Thanks.

Eligible votes are advised to come out and vote for their preferred candidates to run the affairs of our Town for the next 3 years.

Anambra Day in lagos comes up tomorrow on 28th Oct, 2017, Time: 10:00am at the National Stadium endeavor to be there.

May her gentle soul rest in peace.

For BEAUTY PAGEANTRY ... only girls between the ages of 17-29years. Must be an Awka - Etiti indigene.

TALENT HUNT; for both boys and girls. Must be an idigene of Awka - Etiti.

May the interested sons and dauthers of Awka - Etiti fill the forms & submit. We want many to join please.

Interested candidiates should fill the forms and send to  Dr Mrs F. C. Olikeze. (PG Women Wing) on whatsup no. 08033122191 or soft@zelivesoft.com

Watch the cutting of the New Yam Celebration by HRM Igwe Okagbado live on www.awkaetititown.com.ng

Note: viewers questions and comments will be entertained

MY VISION FOR AWKA-ETITI
To make Awka-Etiti a model of Town Union led integrated development
MISSION
To create a peaceful environment where brotherly love abounds and with happiness indigenes and non-indigenes contribute willing to the development and progress of Awka-Etiti and her people.
OBJECTIVE
To, in the next three years, get our people to be fully involved in the overall development of Awka-Etiti and Awka-Etitians.
PROGRAMME OF ACTION/MANIFESTO
The above stated objectives will be achieved following judiciously these steps:
1. ADMINISTRATIVELY
My administration will carry out some administrative changes that will enhance people’s confidence in AIU administration and ease administration of justice, peace and progress. This includes.
a. Accountability: My administration will constitute a financial committee to be headed by the Vice President General with Treasurer, Fin Sec and all the Village financial Secretaries as members. They will prepare our annual budget and see that it is implemented as approved.
b. CONSTITUTION: Using my experience so far gathered as Vice President General and other positions held and interactions with other towns, I will work with Constitution Review Committee that will be set-up to fashion a Constitution and laws that will bring about Peace, Unity and Progress.
c. LAW:  I will propose laws that will make three important committees of Development, Educational and Peace, tenure bound and their memberships of a high quality caliber.
d. SECURITY: My government will continue to improve on the security of lives and properties of our people.
e. ENVIRONMENT: I will ensure continuous cleanliness of Eke and its environs and see that traders keep to clean and serene environment.
f. SPORTS: I will work with the Sports Committee to get sponsorship for our annual football competition.
2. PHYSICAL DEVELOPMENT
a. I will ensure completion of our Eke Market Project.
b. Awka-Etiti Improvement Union under my leadership will work for the completion of the health centre project and the place put into optimal use for the benefit of our people.
c. I will work with the proposed development committee and other stakeholders to:
i. Embark on modernization of our Town hall to a civic centre.
ii. To attract Governmental patronage to Awka-Etiti especially as it affects road infrastructure.
3. HUMAN CAPITAL DEVELOPMENT:
a. My government will train at least ten (10) youths in crafts like fashion designing, furniture making, shoe making etc and give them, on graduation, a start-up capital.
b. Through the education committee set up an Education/Human capital development Endowment Fund, to see to the education/training of our brilliant children from poor families. AIU as a body will be contributing at least N300,000 (three hundred thousand naira) annually to the fund.
c. In corroboration with our indigenous lecturers and Education Committee my government will give proper guidance to our children to easily gain admission into higher institutions and job after school.
d. My government will institute annual lecture for the Awka-Etiti.
e. In corroboration with the AIU Youth wing, AIU under my leadership will institute a quarterly workshop/retreat with aim to reframe the understanding of our youths.
f.  AIU Government under my leadership will through The Education Committee institute annual essay and quiz competitions.
My experience and willingness to render selfless service are my strength.
Don’t be deceived by false propaganda and sentiments.
Go for the best.
Remember, all that glitters is not gold.
Vote for Experience! Vote for Honesty! Vote for All Round Development!!!
VOTE AGUDO FOR PRESIDENT GENERAL AWKA-ETITI IMPROVEMENT UNION.
Remain Blessed.

NOTE: 1. A bird at hand is worth more than a million in the bush.
2. The Angel you know is much better than the ‘Better Angel’ you don’t know

SPECIAL ANNOUNCEMENT ON THE DVD SALES 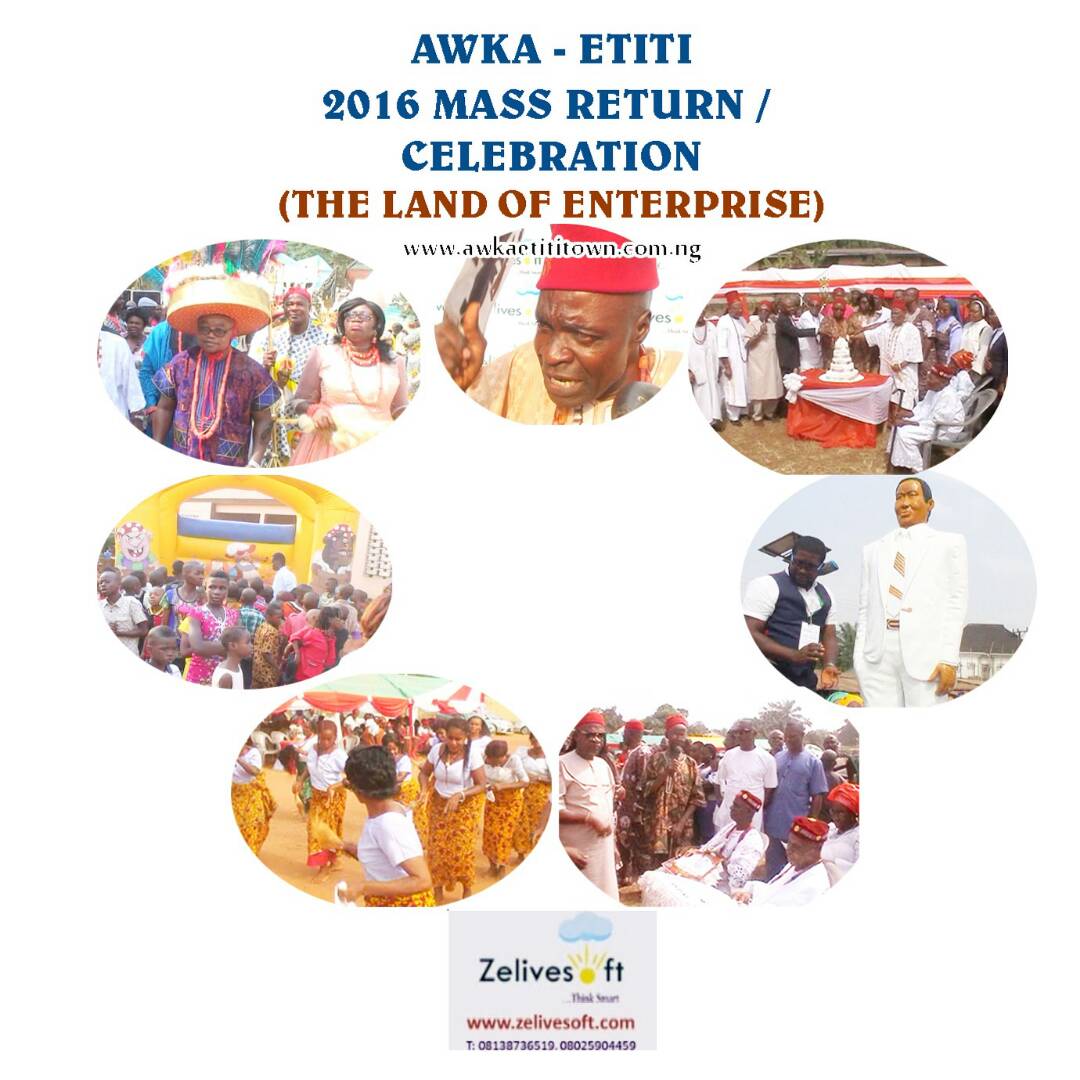 a. Coronation of Igwe Okagbado

b. Unveiling of the iconic statues 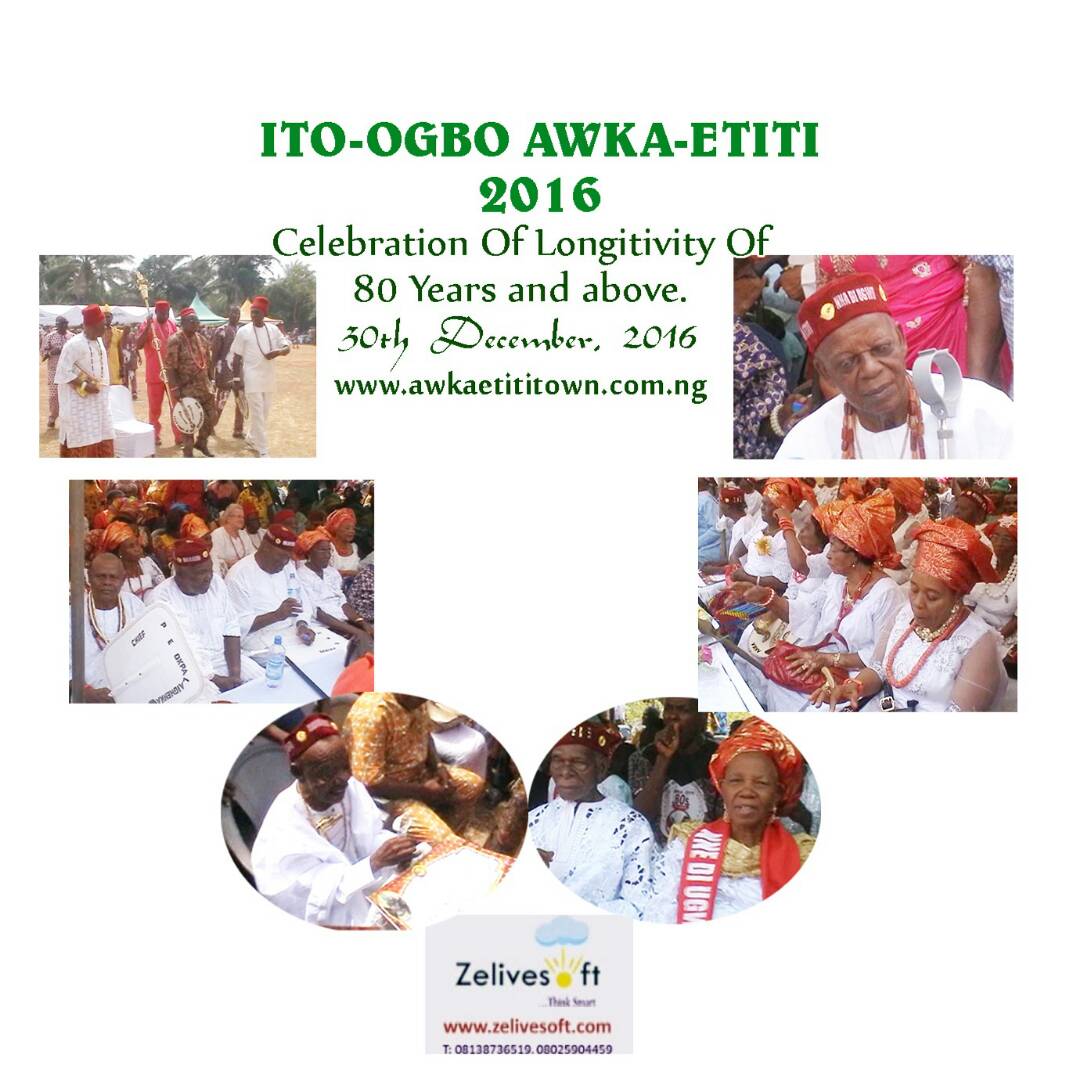 HURRY AND GRAB YOUR COPY NOW WHILE THE STOCKS LAST!!!!!!

The Awka-Etiti League of Core Professionals is Organizing a Debate for all candidates contesting for the elective office of A.I.U.

This is the first of it’s kind and the essence of this debate is to discover the selling points of each of the contending candidates in a particular field. An opportunity to let people know who their interested candidates are and what they have to offer to our esteem town.

The debate will be televised live via the internet on www.awkaetititown.com.ng and Youtube.

1. Awka-Etiti  Electoral Committee Members are to conduct the election and announce the results.

2. Only Bonafide  Awka- Etiti citizens of 18 years and above are eligible to vote, both men and women (Awka- Etiti  Women Married outside Awka-Etiti  are not inclusive).

3. Awka –Etiti Electoral Committee members as well as outgoing Executives of AIU, clerics and church leaders are not eligible to vote.

4. Election shall be by open voting system.

5. Voters are to line behind the candidates of their choice. That is any of the three candidates presented by the respective villages.

6. Once the counting begins nobody shall join the line.

7. Voting begins from the youngest village to the Eldest villages.

10. Only candidates duly sent in by the villages, screened and cleared by the electoral committee shall be eligible to stand for election.

11. All appeals shall go to the AIU Executives after the election if there is any,

12. The Igwe and his Ndi –Ichie shall not be Eligible to vote because of their position.

Awka – Etiti General Election is coming up on the 4th of August 2017.