Governor of Anambra State Charles Soludo condemns the ill-treatment of a popular prophet in the state, Chukwuemeka Ohanaemere, otherwise known as Odumeje. 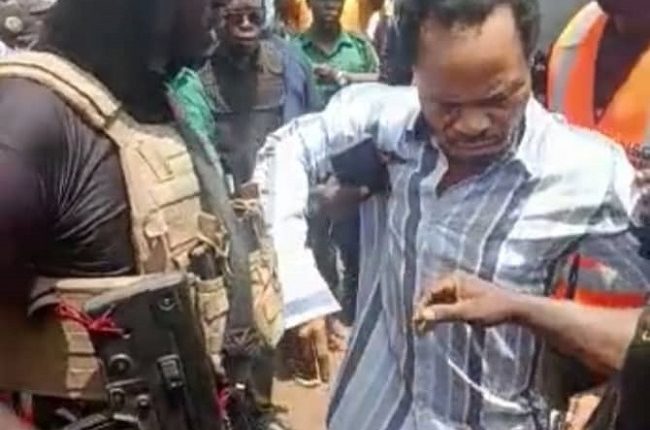 Governor of Anambra State Charles Soludo has condemned the illtreatment of a popular prophet in the state, Chukwuemeka Ohanaemere, otherwise known as Odumeje.

Some tax force members, supervising an on-going demolition of illegal structures in the state, were captured in a video clip  the cleric on Thursday.

The cleric’s church building which was partially pulled down was among the illegal structures marked for demolition by the state government in Onitsha, Onitsha North Council Area of the state.

Mr Soludo said the manhandling of the cleric was “imperfect and unprofessional,” assuring that steps would be taken to correct the unfortunate incident.

“This is highly regretted, and would never happen again. I have instructed that the tax force personnel involved in the manhandling of Prophet Chukwuemeka Ohanaemere (Odumeje) be treated in accordance with rules of public conduct which he roundly failed to uphold,” Mr Soludo said via his verified Facebook page on Friday.

He said his administration will remain undaunted in working to deliver on its mandate, saying the “evoked emotions” were against the manhandling of the prophet and not against the decision of the state government to demolish illegal structures.

“On behalf of the government and good people of Anambra State, I condemn the assault and further ask for your continued support in the fight to restore the dignity of Onitsha and indeed the totality of our homeland,” the governor added.

Meanwhile, the cleric’s church, Mountain of Holy Ghost Intervention and Deliverance Ministry, has said that the main church building was not among the demolished structures.

In a video clip posted on the cleric’s official Instagram page, an unidentified official of the church said the main church building was not affected and that church activities will continue as usual.

The clip showed that the main church building was not demolished, although the entire structure was reportedly marked for demolition.

It is not clear, for now, if the main church will be demolished later.

Mr Soludo was silent on whether the rest of the church building will still be pulled down.